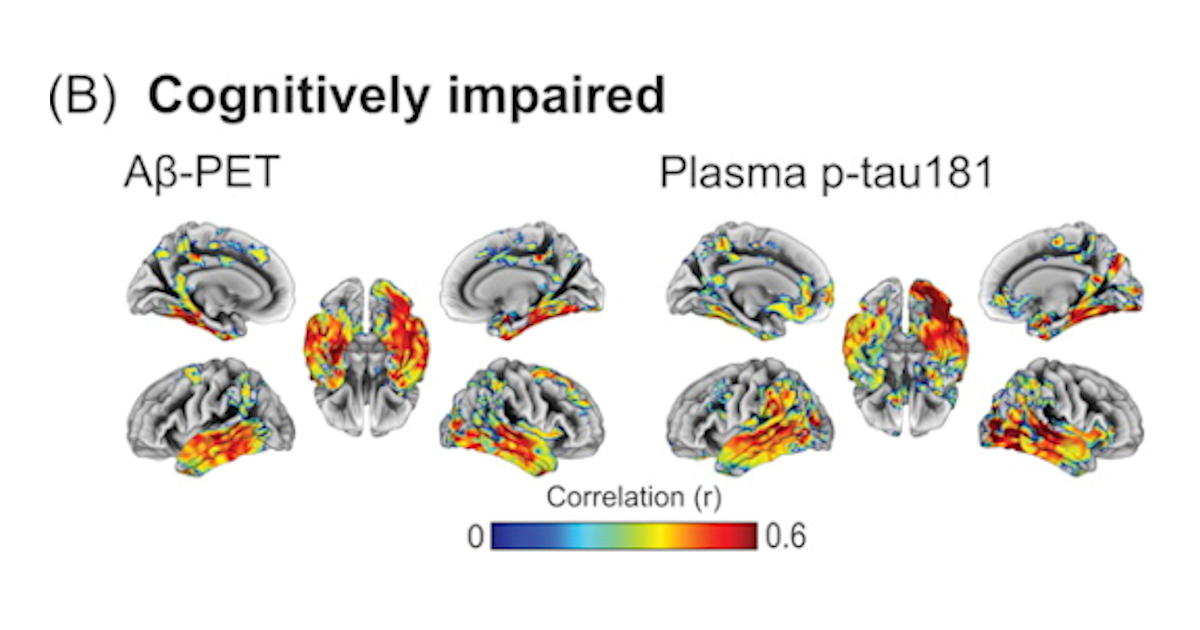 A Swiss group led by lead author Michael Schöll, PhD, from the University of Gothenburg investigated whether fluid and blood biomarkers that indicate Alzheimer’s disease could predict the accumulation of neurofibrillary tau tangles seen on CT scans. PET scans in patients diagnosed with the disease. They found that the lab tests performed well enough to help select patients for PET imaging studies evaluating new treatments.

“The identification of accessible and cost-effective biomarkers that can predict the longitudinal accumulation of aggregate tau as measured by tau PET is essential to facilitate the search for tau-targeting treatments,” Schöll and colleagues wrote.

To date, beta-amyloid PETs are the only established biomarker of Alzheimer’s disease that has been shown to consistently predict longitudinal tau accumulation in cognitively healthy patients. Yet the associated costs and limited accessibility hinder its use in recruiting patients for clinical trials, according to the authors.

Central cerebrospinal fluid biomarkers for Alzheimer’s disease are more affordable and accessible than beta-amyloid PET, and they could allow the simultaneous assessment of beta-amyloid pathology and soluble tau pathology using a single procedure, the group wrote.

In this study, researchers investigated how Alzheimer’s disease biomarkers of cerebrospinal fluid and phosphorylated plasma tau-181 (p-tau181) associate with longitudinal tau accumulation, as measured by the Tau PET, and compared their head-to-head predictive performance with amyloid beta-PET.

Additionally, Scholl and colleagues examined potential implications on the use of fluid biomarkers for clinical trial designs that use longitudinal tau PET as an outcome measure.

Voxel analysis revealed that baseline levels of all cerebrospinal fluid biomarkers showed moderate to strong correlations with longitudinal changes in the standardized flortaucipir F-18 absorption value ratio (SUVR) in CU patients. and MCI. Plasma p-tau181 was more closely correlated with SUVR change of flortaucipir F-18 in patients with dementia, and it predicted tau accumulation with similar but slightly higher values ​​than beta-amyloid PET.

Associations of baseline PET beta-amyloid and baseline phosphorylated tau-181 protein (p-tau181) with flortaucipir F-18 (FTP) Annualized change in standardized uptake value ratio (SUVR) for (A) individuals without cognitive impairment and (B) individuals with cognitive impairment. Image reproduced with the kind permission of Alzheimer’s and dementia: the journal of the Alzheimer’s Association.

Associations of baseline PET beta-amyloid and baseline phosphorylated tau-181 protein (p-tau181) with flortaucipir F-18 (FTP) Annualized change in standardized uptake value ratio (SUVR) for (A) individuals without cognitive impairment and (B) individuals with cognitive impairment. Brain surface renderings represent age- and sex-adjusted Pearson correlation coefficients (r) representing the strength of association between the different biomarkers and the change in SUVR of flortaucipir F-18 in each brain region. The upper right panel depicts age- and sex-adjusted Pearson correlation coefficients (r), as well as p-values, for the association between biomarkers and SUVR change of flortaucipir F-18 in the meta. -region of interest (ROI) of Alzheimer’s disease. Root mean square error (RMSE) for prediction of SUVR change of flortaucipir F-18 by a linear model with biomarker as predictor and age and sex as covariates. The RMSE was estimated using cross-validation without one. Per-voxel statistical maps were thresholded using more lenient cluster formation thresholds of pAlzheimer’s and dementia: the journal of the Alzheimer’s Association.

Cerebrospinal fluid and p-tau181 levels were significantly associated with change in SUVR of flortaucipir F-18 in patients who were positive for beta-amyloid plaque but negative for tau accumulation, according to the results. Higher plasma levels of p-tau-181 were also associated with faster rates of change in F-18 flortaucipir SUVR in beta-amyloid-positive but tau-negative participants, suggesting that elevations in these markers may precede the early tau aggregation, the authors wrote.

Finally, the group investigated the hypothetical implications of using fluid biomarkers in clinical trials that use tau PET endpoints and found that participant recruitment based on fluid biomarkers could result in comparable sample requirements for inclusion in the beta-amyloid PET-based trial, with similar screening failure. rates.

“Our study suggests that [cerebrospinal fluid] p-tau181 biomarkers and plasma represent cost-effective predictors of longitudinal tau accumulation as measured by tau PET, being able to anticipate future tau aggregation even at very early stages of tau deposition,” wrote the group.

The group noted limitations, namely that the number of beta-amyloid positive but tau negative subjects and the number of subjects who progressed to tau positive at follow-up were limited. For this reason, analyzes involving these participants should be considered exploratory. Additionally, the limited number of participants did not allow accurate assessment of plasma p-tau181 as a stand-alone test for participant selection in trials with tau PET results.

Nonetheless, the use of fluid biomarkers may be an effective strategy for enrolling participants in anti-tau clinical trials, as it resulted in enrichment similar to amyloid-beta PET, the researchers wrote.

BOQ stock price is under scrutiny in March, here’s why

HKEX review of issuers’ annual reports for the year ended 2020